My new blog is at http://toonsville.wordpress.com

I can't seem to overcome the problems with this blogger blog so I moved to http://toonsville.wordpress.com see ya there!
Posted by Bill at 4:57 PM No comments: 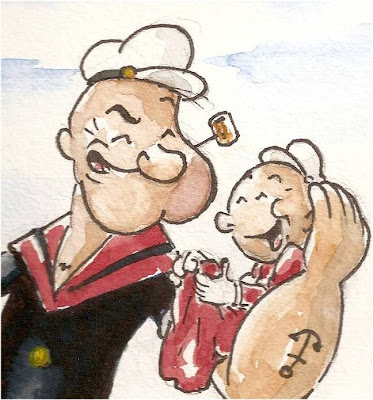 This day in1929- First appearance of Popeye the Sailor in E.C. Seegar's comic strip the Thimble Theatre.
According to the King Features website, "Spinach growers credited Popeye with a 33 percent increase in U.S. spinach consumption and saving the spinach industry in the 1930s!"
Although Segar's Thimble Theatre strip, first published on December 19, 1919, was in its tenth year when Popeye made his debut, the sailor quickly became the main focus of the strip.
Posted by Bill at 8:43 AM No comments: If you've never seen Thomas Schaller's watercolor paintings I would recommend a visit to his web site at http//:thomasschaller.com He is fantastic at painting buildings and cityscapes. Every once in a while I attempt a cityscape, some times I nail it and some times I don't. 9"x12"
Posted by Bill at 8:49 AM No comments:

My Affection For Confection - acrylic 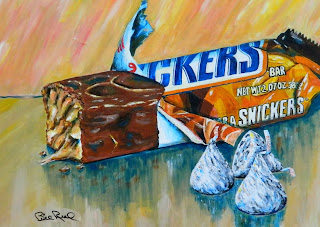 I painted this a couple of years ago and put away thinking I didn't like it that much and as I was going through my stash of stuff the other day just happened to pull it out. Much to my surprise I wondered why I didn't think it was any good before and now I like it. I took a photo of the painting and opened it in Irfanview and did some cropping and that was the solution I was looking for. I think maybe I get too close to my paintings and just get tired of working on them. The best solution I find is to put it away and look at it some other time, maybe next week or next month when I can see it with a fresh eye. acrylic on stretched canvas 12"x16"
Posted by Bill at 8:07 AM No comments: 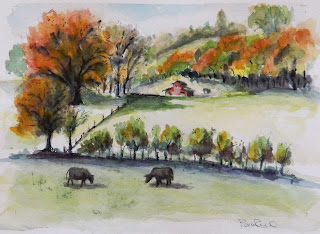 This is watercolor I did last week before the weather changed and got more like winter. I drove up highway 49 just outside of Auburn, Ca. and parked just off the road for about an hour to get this view. From Roseville, I don't have to drive more than half an hour to get into farm country with the rolling hills and massive oaks so it makes for a nice painting trip.
Posted by Bill at 8:13 AM No comments: 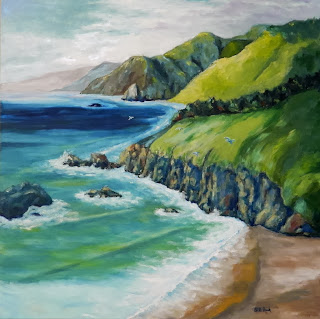 After a few changes I'm calling this one finished. 36"x36" oil on stretched canvas
Posted by Bill at 10:04 AM No comments: 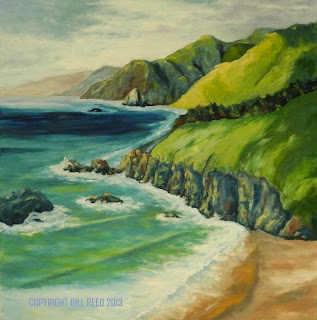 This is the biggest painting I've attempted so far, 36"x36". My daughter gave me this canvas for my birthday last June and told me "Paint bigger Dad", so I've been staring at the canvas wondering what the hell I would paint on something that big. A little intimidating for sure. I was trying to decide between the Grand Canyon and a California coastal and this is what I ended up with. I love the ocean and beach so it was a natural for me to go with the coast scene. I'm not quite finished yet so didn't sign it.
Posted by Bill at 9:34 AM No comments:

Bill
I've worked on many animated TV shows and a few theatricals as an animator and director. Some of my favorites include "The Archies", "Fat Albert and the Cosby Kids", "Star Trek", "He-Man", "She-ra", "The Chipmunks", and "Cow and Chicken".